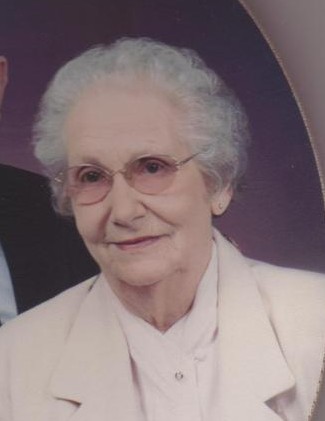 Arlene Kriebel Hughes Evans, 90, of Wellston passed away suddenly on Monday, May 25, 2015, at Grant Medical Center in Columbus.

She was born in Wellston on April 6, 1925, to the late Kenneth E. and Pearl C. Ervin Kriebel. She was a graduate of Wellston High School and a receptionist for the Jackson County Board on Aging. She was a member of the Community of Christ, Wellston Branch, and the Wellston Senior Citizens. She loved to read in her spare time. Besides her parents, she was preceded in death by her first husband, Darrell L. Hughes, in 1986; her second husband, Howard S. Grace, in 1993; her third husband, Richard Evans, in 2010; a baby brother, Kenneth Eric Kriebel; and a sister, Ruby McLaughlin.

Friends may call at the Jenkins Funeral Chapel in Wellston on Thursday from 4 until 8 P.M. A Celebration of Life will be Friday at 1 P.M. at the Jenkins Chapel with Elder Ann Keating officiating.

Arlene’s final resting place will be in the Fairmount Cemetery in Jackson.

The family suggests memorial contributions be made in her memory to the Community of Christ, Wellston Branch, 652 Radcliff Lane, Wellston, Ohio 45692.

Thoughts and memories may be posted at

To order memorial trees or send flowers to the family in memory of Arlene Hughes Evans, please visit our flower store.