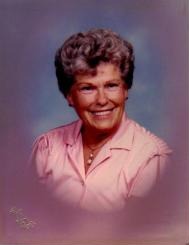 Dorothy P. Emmert, 94, of Wellston passed away Saturday morning, June 20, 2015, at Jenkins Care Community where she had resided for the past two and a half years.

She was born in South Perry, Ohio, on November 2, 1920, to the late Clayton and Laura Jane Cavinee Poling. She was a 1939 graduate of Wellston High School, where she was very active and made the varsity basketball team her freshman year. She was a member of the former Trinity United Methodist Church. She was a poll worker and presiding judge for many years and was on the Wellston Senior Citizens Board and was the program director for about 20 years. She was an avid walker and enjoyed riding her bicycle.

Besides her parents, she was preceded in death by her husband, Eugene J. Emmert; four brothers, Donald, Paul, Clayton, and Glen Poling; two sisters, Virginia and Edna Conn; and a granddaughter, Robin Emmert.

Friends may call at the Jenkins Funeral Chapel in Wellston on Tuesday from 11 A.M. until the funeral hour at 1 P.M. Reverend Timothy Jones will officiate the services with burial to follow in the Ridgewood Cemetery in Wellston. The family suggests memorial contributions in Dorothy’s memory be made to the activities program at Jenkins Care Community,142 Jenkins Memorial Rd., Wellston, Ohio, 45692.

To order memorial trees or send flowers to the family in memory of Dorothy Emmert, please visit our flower store.