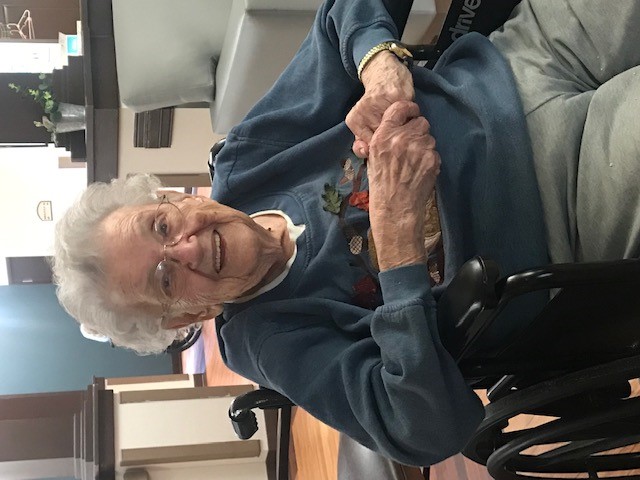 Hazel Eunice Ghearing, age 103, entered into her heavenly home on December 2, 2022, following many years of declining health. Hazel was born on August 28, 1919, in Dundas , Ohio, and graduated from McArthur High School in the class of 1936. Mrs. Ghearing married the late Harold Joseph Ghearing and this union lasted for 52 years until Mr. Ghearing's death in 1993. They made their home in Wellston, Ohio, and raised 4 children. Surviving children are Harold David Ghearing ( Regina ) of Circleville, Ohio, Sue Ann Perkins ( Woodie ) of Monticello, Georgia, and Cindy Jill Wilder of Louisburg, NC. She also is survived by 5 grandchildren, 5 great grandchildren, and 2 great great grandchildren. She was preceded in death by her parents, Eva Cope Easterling and Harry E. Easterling, mother and father-in-law Lillian Dunfee Ghearing and William J. Ghearing, daughter and son-in-law, Jennifer Lee Ghearing Zimmerman and Andrew Zimmerman, son-in-law, Ronald Wider, and sisters Wilma Easterling Ogle and Dorothy Easterling Butsko. Hazel never met a stranger and was known by many in Wellston from working in the old Wellston Sundry and News store from which she retired in the late 1970's. She was very strong in her faith and was a member of the Wellston Church of God for over 50 years where she was the church pianist and secretary treasurer as well as serving in many other capacities over the years. At age 90, after living 26 years at Seton Square in Wellston, she relocated to Louisburg, NC to live with her daughter and son-in-law, Cindy and Ronald Wilder and their son Grayson. Due to declining health, Hazel then moved to an Assisted Living Center and then to a Skilled Nursing Center, both in Louisburg, NC. Hazel loved playing Skip-bo ( a card game ) over the years, a good hot cup of coffee, and just having a good time. She loved people and was often complimented for always having a smile on her face and for always being happy and content. She enjoyed every day she was blessed to have and had made many friends for the 13 years she lived in Louisburg. Cremation Services provided by Bright Funeral Home and Cremation in Wake Forest, NC. A celebration of Life Service will be scheduled for a future date and will be held in Wellston. Online condolences may be made at www.samjenkinsfuneralchapel.com of Wellston, Ohio.

To order memorial trees or send flowers to the family in memory of Hazel Ghearing, please visit our flower store.