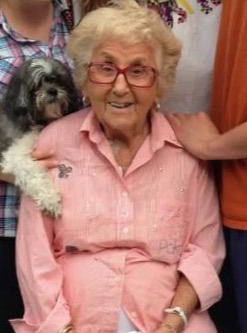 Jackie Lockard, 94, of Wellston, Ohio, passed away peacefully, while surrounded by her family and friends, at her home on Wednesday morning, May 29, 2019. She was born in Boise, Idaho, on September 26, 1924, to the late Huey E. Reed and Lillian Hobbs Reed. She was a 1942 graduate of Boise High School. She was the owner of Jackie's Antiques in Wellston and a member of Hope United Methodist Church. She was a former board member of Sylvester Memorial Wellston Public Library and a member of Eastern Star, the American Legion Auxiliary, and the Wellston Historical Association. On Thursday afternoons she enjoyed meeting with and being a host for the Wellston ladies bridge club. Besides her parents, she was preceded in death by her husband, William Thomas Lockard Sr. on May 21, 2007; her son-in-law, Sam Barnhouse; a brother, Jim Reed; and two sisters, Julie Marsh and Rosemary Powell. She leaves behind her son, Chip ( Alix) Lockard of San Francisco; her two daughters: Ann ( George) Helbling of Dresden, Ohio, and Lisa Barnhouse of Hillsboro, Ohio; a brother, Huey ( Ruth) Reed Jr. of Boise; six grandchildren: Andy ( Stephanie) Helbling of Tucson, Arizona; Tom ( Simone) Helbling of Hillsboro, Oregon; Samantha Barnhouse ( Grant Kibbey ) of Radnor, Ohio; Will Barnhouse of Boynton Beach, Florida; Zoe' Lockard of Paris, France; and Brice Lockard of New York City; two great grandchildren: Nicholas and Alexandra Helbling; sister-in-law, Norma Lockard of Wellston; dear friends, Jerry ( Carol) Ghearing and Peggy ( Bill) Shumate of Wellston; nieces and nephews; and her many caregivers who became close friends: Linda Jarvis; Chris Cline; Sherri Sauer; Kayla Cain; Davian and Jarrod Rogers; Michaela Baisden; Sharon Lockard; Katie Houch; and Chassidy Norton. The family will receive friends at the Jenkins Funeral Chapel in Wellston on Saturday after 11:00 A.M. and until the funeral hour at 4:00 P.M. A funeral procession will follow with burial in the RIdgewood Cemetery in Wellston. The family politely requests that all memorial contributions in Jackie's name be made to the Sylvester Memorial Wellston Public Library, 135 East 2nd Street, Wellston, Ohio, 45692.

To order memorial trees or send flowers to the family in memory of Jackie Lockard, please visit our flower store.