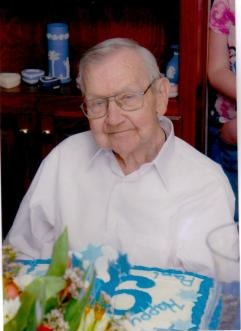 Dr. Paul Jacob Essman, 90, of Wellston, passed away Saturday, March 7, 2015, at his home. He was born March 26, 1924, in Wellston to the late Albert Peter and Myrtle Allen Essman. He attended Sts. Peter & Paul School and was the valedictorian of the 1941 Wellston High School class. He attended Ohio University for two years and graduated from the OSU College of Dentistry as a 2nd Lieutenant in the U.S. Navy in March 1946. He then served three years in Japan and Korea before returning to Wellston to begin his private dental practice.

Besides his parents, he was preceded in death by three sisters, Martha Cleveland in 1968, Ruth Hackett in 2002, and Rita Dahlberg in 2010, as well as brothers-in-law Clark Cleveland, Bernard Hackett, Carl Dahlberg, and Harry “Brownie” Reese and his wife, Nancy, and a great granddaughter, Rhiann Richmond.

Paul served on the Civil Service Commission, the United Way, and the Milton Banking Company board of directors. He was a member of the Wellston Rotary Club where he was a past president and was a great supporter of and former end man of the Rotary Minstrel Show. He also served as president of the Sts. Peter & Paul Parish Council and was instrumental in the building of the Parish Hall. He was also a member of American Legion Post # 371 of Wellston.

The family will receive friends at the Jenkins Funeral Chapel in Wellston on Friday from 6 until 8 P.M., followed by the Rosary. Mass of Christian Burial will be Saturday at 11 A.M. at Sts. Peter & Paul Church with Father Donald Maroon officiating. Interment will follow in the Mount Calvary Cemetery in Wellston. The family request that all memorials be made to the Sts. Peter & Paul School in Paul’s memory.

To order memorial trees or send flowers to the family in memory of Paul Essman, please visit our flower store.